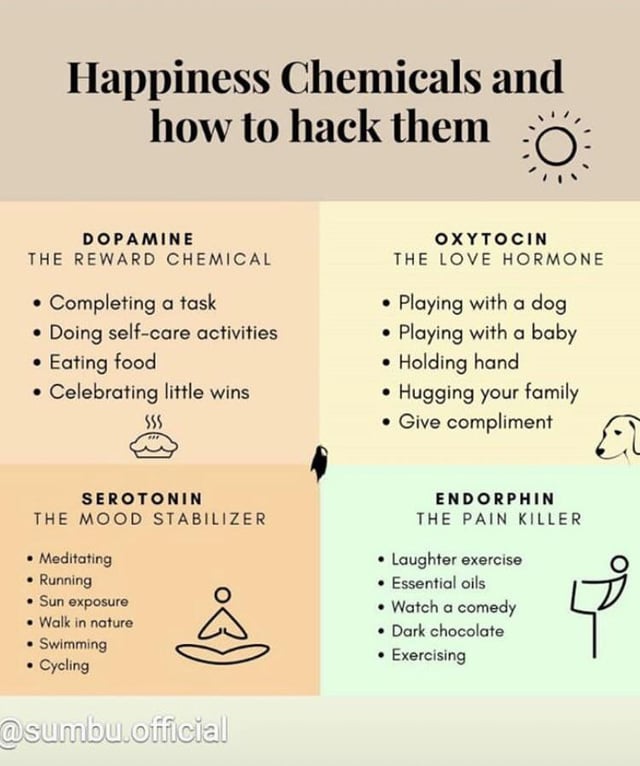 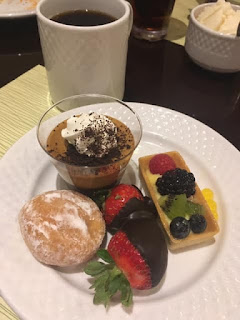 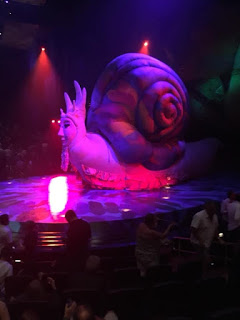 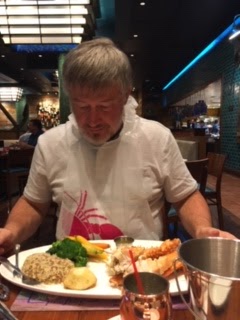 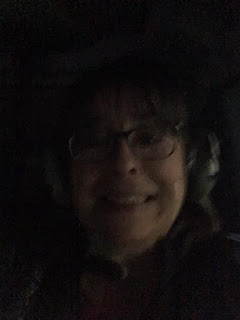 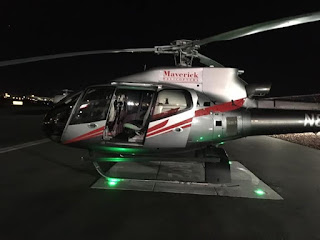 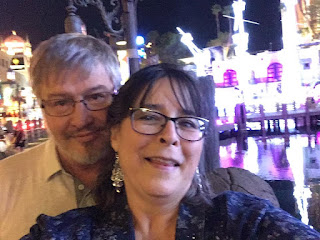 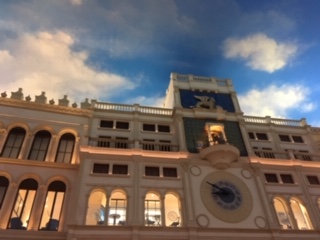 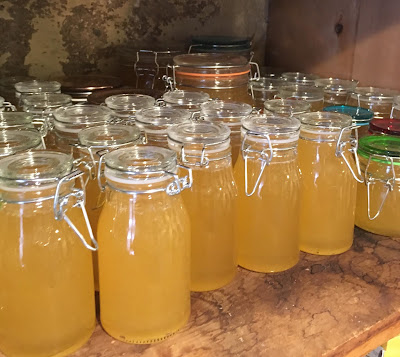 Over the weekend we did a thing that comes in near the top of my "Coolest Things I've Ever Done" list. We harvested some honey!

Wylie brought home some hives early in the year, and arranged to get queens and workers in early April. Cool! He set everything up, and got the bees into their hives. A queen comes in a little box with a sugar plug. There are a few bees with her, who chew on the sugar plug, releasing her into the hive.  Along with the queen in her box, there were a couple dozen workers in the larger box. There was food and water in that box, and once the queen and her helpers got out of the queen box, there were the others waiting to get started. And then the action began! 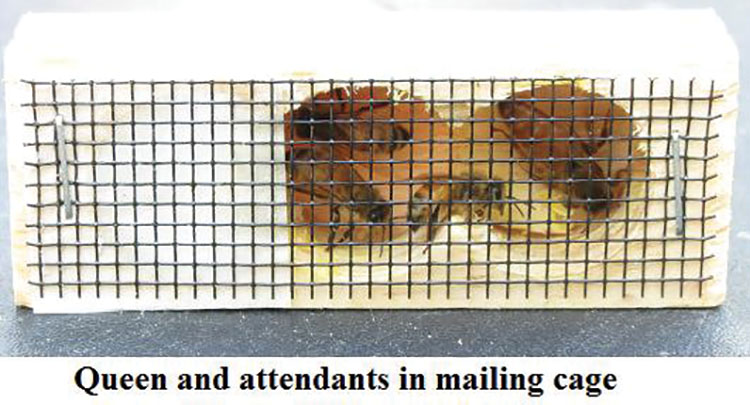 Of course, we don't get to directly observe most bee action! The queen gets busy laying eggs, and the workers stay busy attending the eggs, prepping the brood cells, and keeping things orderly in the hive. We stand on the outside going "Wonder how they're doing."

We have been curious, because we have two hives, and in the heat only one of them has been "bearding" This is when the bees congregate outside the hive, collecting together en masse, and looking like a beard, truly. They do it when the interior of the hive gets too warm, and we, watching from the outside, thought there was a huge population in one hive, while the other colony might be dwindling because they just don't beard. But Wylie checked it out, and found that indeed, the non-bearding hive was flourishing as well.

The time came to harvest some honey. Wylie got his helmet and gloves on, and carried the new boxes and slats out to the hives.


Lifting the top box off, and examining the slats, he found brood in the first four slats that he checked. We don't want to disturb the brood, so he left those slats. 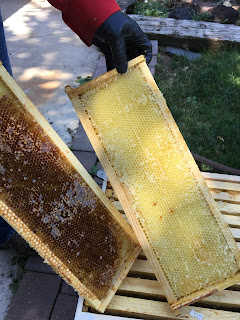 We got back to our processing area, and found that some of the honey was really dark, while other honey was pale and yellow. We figure this must be from different sources of nectar.

One slat that was 100% honey on one side had about a dozen brood cells on the other side. We didn't notice the brood cells among all the honey, or we would have left that frame in the hive. We could see the baby bees chewing their way through their domes, and I felt so bad! A few escaped before we put their slat in the extractor, but they didn't have other bees around, touching them and making them part of the hive. I did feel bad.


Though we didn't get stung, we did have bees in our faces, and at one point I had a security detail herd me away from the hive. Mostly when bees hover nearby they're just sorta checking you out, but I had three or four bees come at me while I was watching the action at the hives. They were really in my face, bouncing off my head, and generally being much more...assertive...than a normal honey bee. I took the hint and moved away, and they let me be...except one. He wasn't happy until I went inside the house, and he escorted me all the way to the back door.

Helpful Hint: Waving your hands at bees whose hive is being disturbed does NOT make them go away.


The extractor is centrifugal, spinning the honey right out of its cells onto the walls. The honey then drips down the walls of the extractor to the base, where there is a "honey gate". Can you see the filter in the bucket?

The filter is much needed, because there's wax, propolis, bee legs, and whole entire dead bees in there. They love their honey and some of them hung out around our processing area the whole time we were working. Of course they'd try to light on the honey and OF COURSE, they would get stuck in it. There was no saving them, and again I felt bad.

We lifted the filter out and tied it to a broom handle. Then Wylie twisted, and sort of smooshed the honey along. The recommendation is to leave it to strain, but we had nowhere to leave an open bucket of honey so... The filter keeps out the bee parts, etc, but pollen is able to get through so our honey is considered strained, not filtered. Pollen and the enzymes naturally present in honey are left, making it a more complete food.

The flavor is unique, again because their resources are varied, unlike the clover honey available in grocery stores. It's a stronger flavor, with depth or tone. I felt like it was a wine tasting. Another difference, at least in the several samples I lifted from the edges with my finger: Grocery store honey does NOT have bits of wax in it!

We estimate that we had a harvest of about 3 1/2 gallons, and had enough jars for 2 gallons, neat and tidy, and looking like champagne. 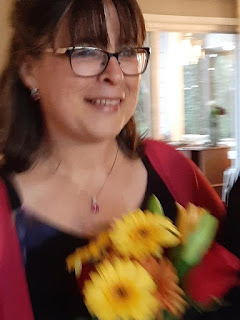 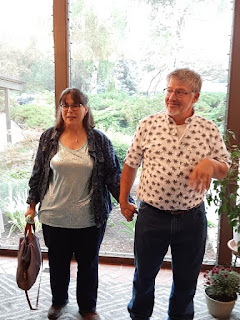 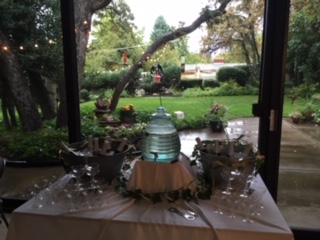 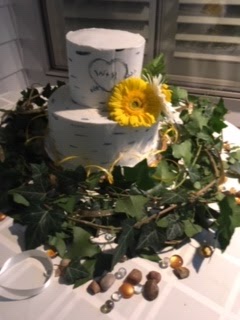 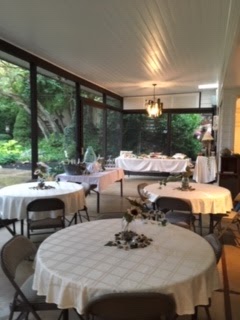 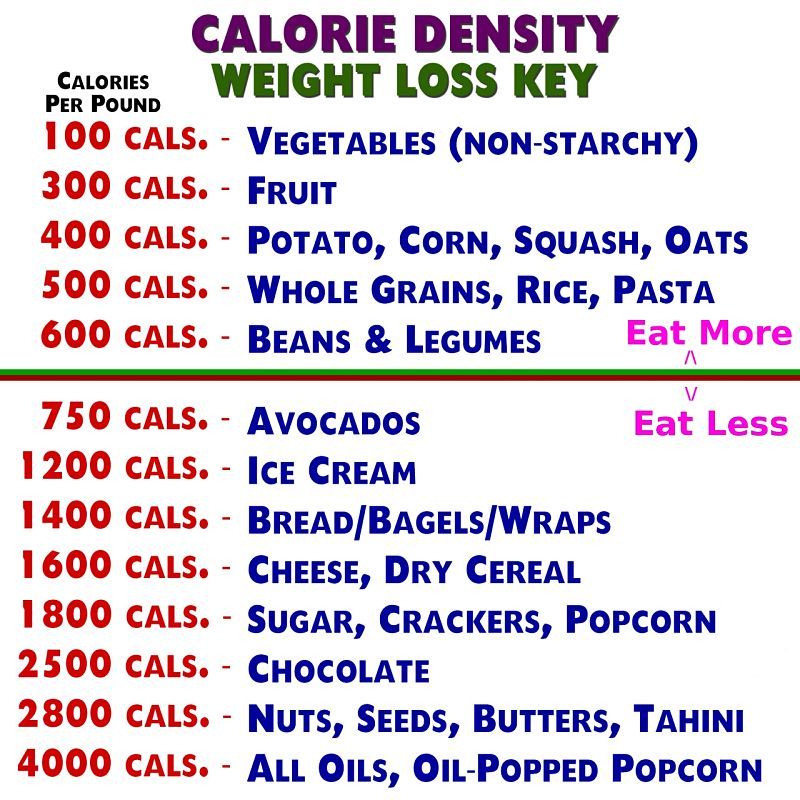 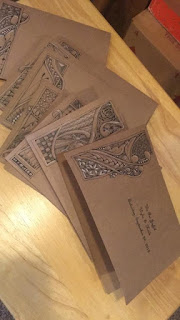 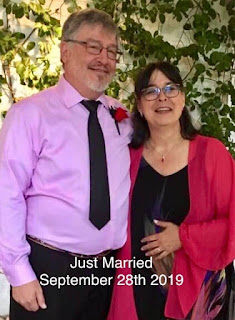 I accidentally deleted my post! Thankfully I had it saved on another blog (which was also by accident but thank goodness I had it)

So this is the replacement, minus the comments it had received :(

Well tickle me pink! The Diva Challenge this week is UMT, and my tangle, Mezzanine, was selected.

But first, let me show you pictures of my little baby grandson!


he is 17 months old and yes, he is a pistol! My little sweet angel baby. Orion. 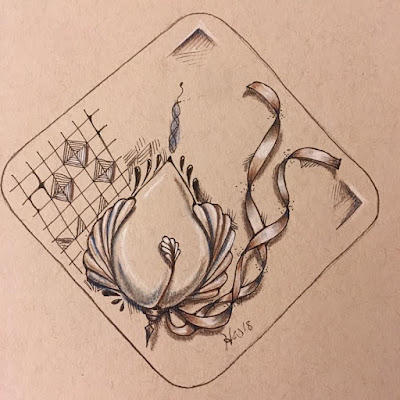 Now, this is my entry for the Diva Challenge...I'm going to play some more, because it's been a long time since I got this out. But doesn't it just look like a bottom? LOL I didn't mean to do it that way, but with the shading came the curvaceous hiney. And there's even a "Tramp Stamp" hahahaha!


TILES AND ZIA'S FROM OTHER CHALLENGES

Even though I haven't posted a blog entry for ages (thanks to a cranky old slow corrupt laptop at home) I have been busy with several groups on Facebook.

This is a tile swap from the Traveling Tangles Project. The month was June, and the theme was Blue.

We moved to a new place, from a tiny 600 sq ft one bedroom, into a duplex with shared kitchen (My mom's place. We were able to put a bathroom in the basement, but no way could there be a kitchen) and one of the first things I did after the move, was to make some tiles. This piece was left over from that, and I tangled on it, thinking I'd cut it down to two bookmarks. But then it looked pretty good as-is, so I left it.

For Inktober this year, I am posting to the FB group Square One Zentangle. I joined them very recently to hone my actual Zentangle skills...black and white, on a tile, with shading.

And with that, I am done for now.
Thank you for reading, and commenting. Comments make me happy!
Posted by HeidiSue at 8:51 AM 27 comments:

Trying this from my Amazon Fire. Let's see how I do! 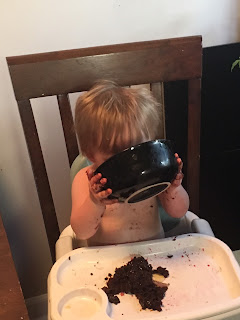 Orion turned one! Can you even believe it! 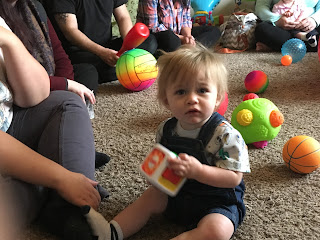 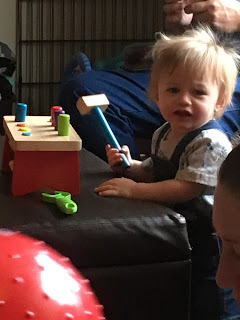 I'm sure mom will appreciatappreciatee the genuine wooden mallet! 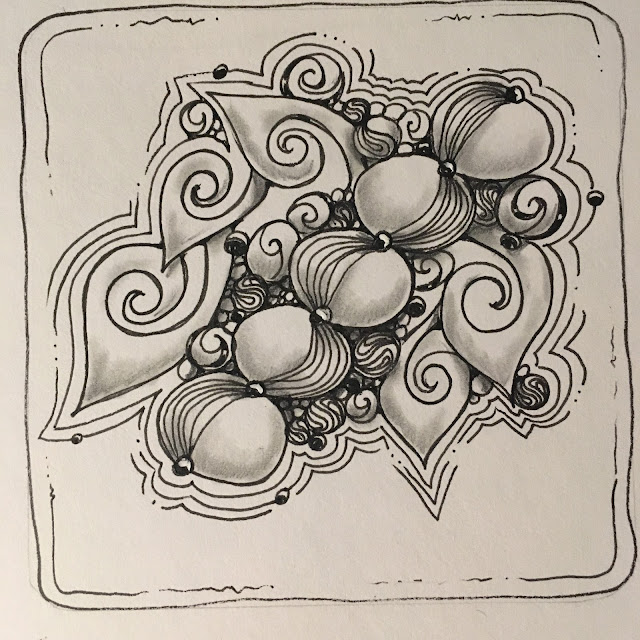 The Joey challenge combined really well with the Diva challenge: use auras. Turned out fun, and looks like some floating seedling on a calm eddy. 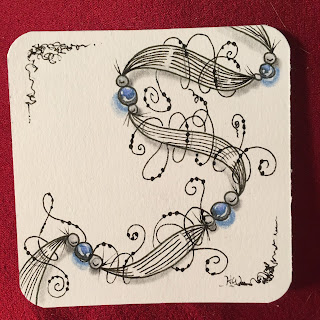 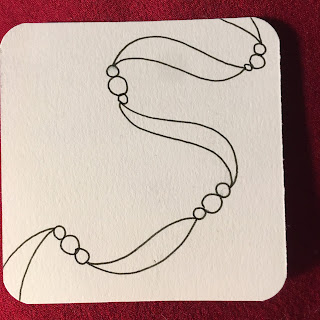 From the Traveling Tangled Project. The start from Megan White was so ribbony. I loved doing this one!
Posted by HeidiSue at 4:28 PM 26 comments: