Some Challenges, Some Sketchbook

It's been a while since I sat down and really wrote anything here, so I thought I'd give it a spin before my day really starts. Brekkie in my tummy, tea at my elbow, and here we go.

The coolest thing in the past few weeks was the Journey/Doobies concert I went to with my feller Wylie. Two years ago, going to see Journey was our first date, so this was a fun throwback for us. 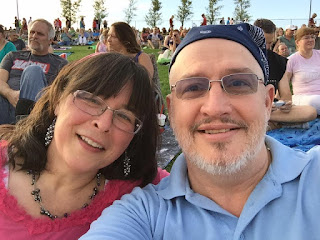 Me, and Wylie. His best friend has cancer, so he shaved his head in solidarity, and now goes around with his sexy do rag hahahaha! 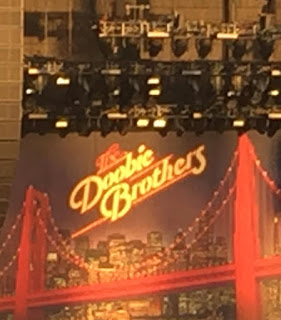 the Doobie Brothers have been a favorite band of mine since I was 15 years old. They are super danceable, and so SO good. The sax, the violin...the wailin guitar. Awesome! 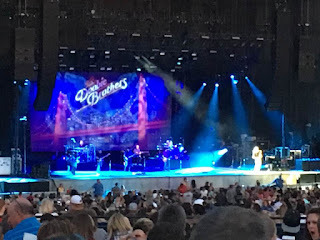 There was a HUGE crowd there. Usana amphitheater is an outdoor venue, with seating near the stage, and a grassy hillside sloping up for the less expensive seats. We brought a blanket and some short legged chairs...and a flask with fireball in it shhhh don't tell.


Then JOURNEY! wow, did the people roar! Journey really knows how to rock it. 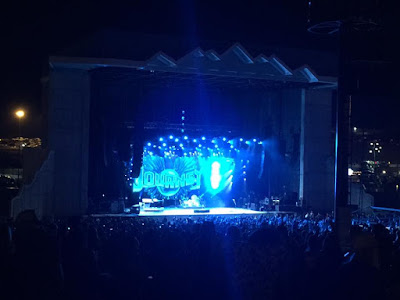 they had an amazing light show, and a screen on stage where you could see close ups of the band playing. The highlight of the concert was an absolutely stunning, jaw dropping drum solo by Steve Smith. About five minutes of jammin...just amazing. I made some art trying to depict it 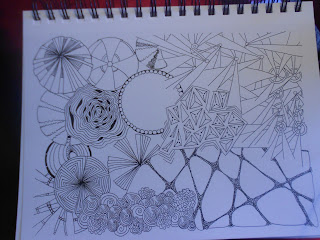 You can see the light show in the upper right corner, and the drums as seen on the big screen on stage in upper left, then there's a cluster of printemps in the bottom centerish, which would be the actual drum set, with a wall of nzeppel (rock...gettit?)

I love this concept, but made the mistake of coloring things in...not liking it so much now. But it was fun to do. 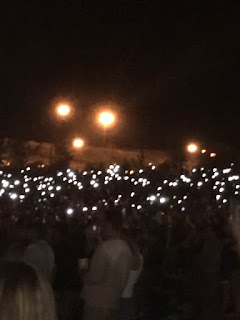 The lights go down in the city...YAY JOURNEY!!!

everyone holding up their virtual lighters hahahaha


Light show is a pattern that cropped up for me that night, falling asleep after the concert


They had magenta, pacific blue, brilliant white, yellow, and green lights that swept the stage and the audience. Very cool. I tried to capture the motion and energy. I will create step outs for this one.

Now, on to the challenges.

There are two challenges I wanted to post to this week, in one blog post. The Diva challenge was to use ING in a piece. This is a cool pattern based on a structure that Marie and Rick saw somewhere, but it always reminds me of the Olympic torch in Salt Lake City 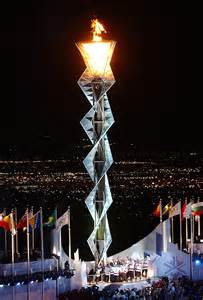 with the summer Olympics just ending in Rio, and me not participating in that challenge, maybe this could be a double challenge item heh.

Anyway, ING does remind me of the Olympic torch from when we hosted the 2002 Winter Olympics whichwasverycoolandiwishtheywouldcomehereagain.

Salt Lake became a more sophisticated place, and we still benefit from the changes that we frantically made in preparation. The Trax system alone is worth what we put up with, getting it up and running. But we also still have the various ice skating venues available for use, and improvements at the ski resorts, etc that people play in/on all the time. 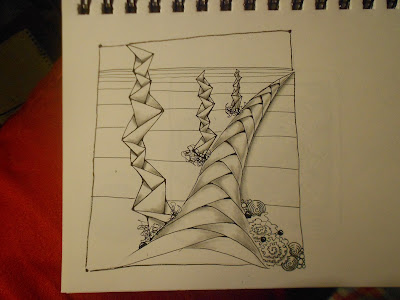 the string I made for this looked like a road disappearing over the horizon, so i went with that a bit. Btweed road, with a cluster of printemps and rock flower (another possible pattern I made up after the Journey concert)...and ING towers sort of following the road...see how they seem to get smaller? I did perspective!

ING seems like a pattern that would be fun to do as a border, too. Hmmm...

Well then, Joey is doing a very cool thing for challenges currently. Taking a page from the awesome traveling tangles project on FB, Joey gives us a "starter" pattern, and we are to create a piece using her "tile"

Though i didn't post last week, I did make a tile using that fun paradox triangle 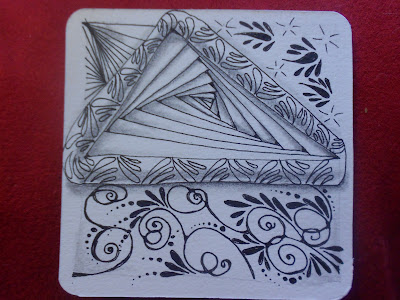 Paradox surrounded by Ditto edging, and my own Flysh in the upper right corner. I invented that one when I was practicing ditto for the first time a couple of years ago. Along the bottom, another tangle I like to play with. I call it Smoke, but it also has some flux elements to it and maybe a bit of Henna Drum. It is more of a tangleation than a new invention, IMO.

So, that was last week's challenge from Joey.


This week, she gave us a little nugget of sparkle 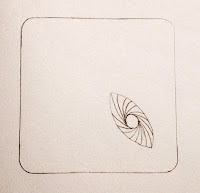 and we get to finish it however we want...

Sparkle is so much fun, I made a bunch of em. 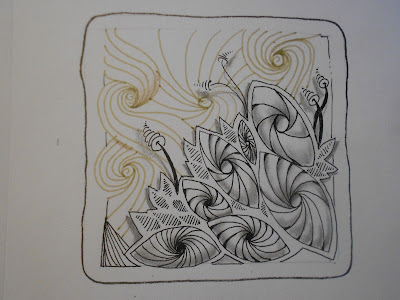 Then, indyrella has the same shape, but with the energetic, highly textured lines.
Carrying that theme of many lines stacked up,
I put zinger in there.
Then, wanting to mirror the swirly stuff in Sparkle, I used my tombow tan pen for Verve.

To be honest, I doubt that the black and tan really works that well together...unless we're talking about stout beer. hahahahaha! But, it is what it is, and at any rate, I love how the shading looks in this one.

Now, here are a bunch of pics from my sketchbook, with minimal commentary:


Umble, Undling, Aloha, Beelight, Printemps, Butter, Nzeppel, Bumps. In the center, some lozenge shapes with ribbons and strings around some of them, Aquafleur style.

This one to the right was for a challenge at our Intermountain Gathering...we were to create a piece using our initials. H for Hollibaugh/Heidi and W for Wud/Whitney. I made this while watching a movie Song of the Sea, a very artistic, creative animation about the legend of the Selkie. BEAUTIFUL movie. Visually amazing. This piece has some of the same values/qualities of the movie. Spirals, organic, subtle background details. 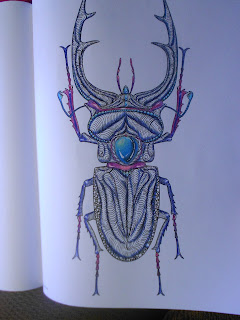 This isn't from my sketchbook, but from the Ben Kwok book Wildlife Design. It is my most recent completion from that book. First time playing with zengems in quite some time. Fun to do! There is a terrific Facebook page called Ornation Creation, if anyone is interested. Ben posts templates, and invites anyone who wants to, to use them for tangling in. Not only from his books, but current works he develops. It's pretty cool to see the creativity there. 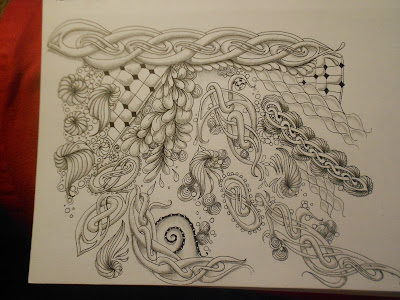 And to finish off, a page from when Skye first came out, and I spent some time playing with it.

So you see, even though I haven't posted much, I've kept myself busy with creating. Good fun!
Posted by HeidiSue at 7:51 AM 9 comments:

The Diva this week challenged us with a duo tangle. And the two patterns are Meer and Auraknot. It's been a while since I played with auraknot, so this was fun.

I played around with a star shape a little bit then hit upon a square and decided to do two squares perpendicular to each other, and fill it with meer. 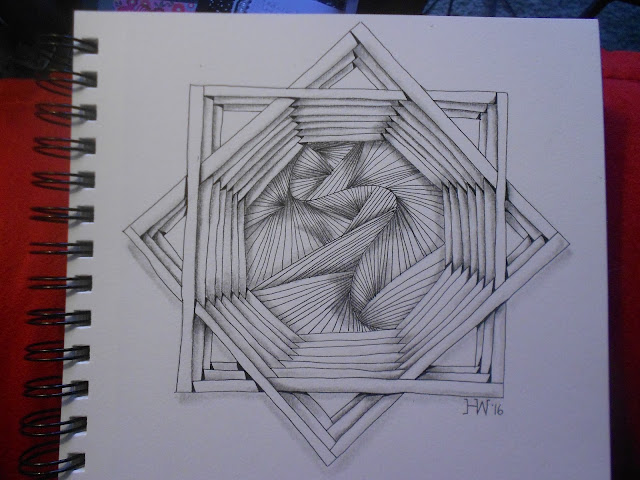 meer came out kinda twisty, because the connecty side lines/ribs were so long, and they ended up not all pointing up in that inverted V, so I adjusted here and there and it doesn't look much like Meer after all, but I think it looks SO cool! And I like the piece as a whole. It was extra fun, because I used a new pen, in my Canson multimedia book...98 lb. paper is SO NICE.

It reminds me of a basket full of silky fabric.
Posted by HeidiSue at 5:20 PM 14 comments:

What a fun tangle to play with, Knightstar! By drawing straight lines, you end up with curves...it is a lot like mathematics! ha! It reminds me of an art project my mom taught to her cubscout troop, using cardstock and red yarn. Cool!

It wasn't easy to grasp right off the bat, so I played with it some 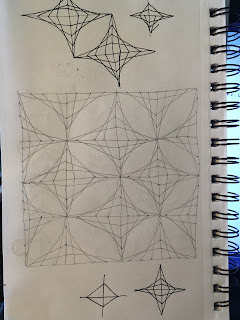 I penciled some, and did some individual motifs. 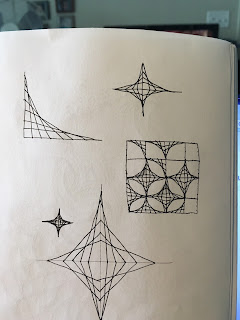 That piece on the bottom, I tried making it with the squares...it doesn't work as well, does it.

Well, I put it aside for the time being and started just tangling on a blank page in my sketchbook making a sort of Linq type thing and bubbles and flux and stuff...then there was a corner where a grid would fit and I went for it :) Fun! 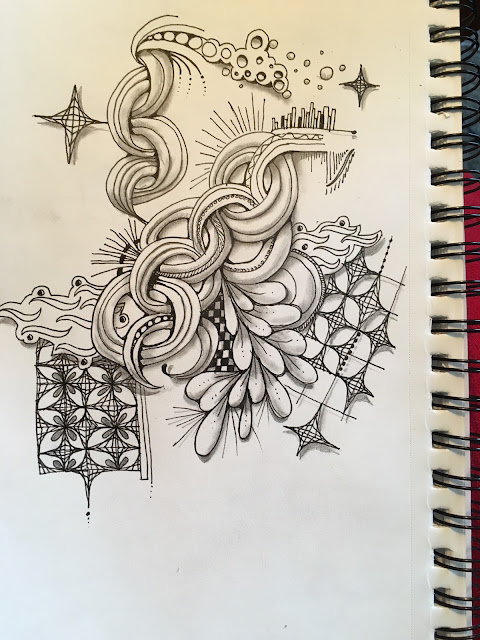 I kinda like this...not sure what it reminds me of...there's a city and some burgeoning energetic land around it, and a sparkling sky over it....