What a fun pattern! Ellish is elegant and curvy and has depth. I was enchanted as soon as I got the email from zentangle.com, and tickled to see it as our challenge this week from the Diva. I can't wait to see what others do with this one...meanwhile, here is mine:

Because I wanted to, I made one Ellish on three different tiles: an inchy, a Bijou, and a standard tile.

Playing with this initially, (heh initial gettit?) I found that keeping the aura-knotwork to a minimum was more pleasing than layering a lot. Then I saw Laura's examples on her blog post, and thought...hmmm...pretty nifty.

So, my regular tile has more of that layered look, and is deeper.

As with so many tangles, shading does amazing things for this one. I've also figured out a way to make the letter H with similar technique: 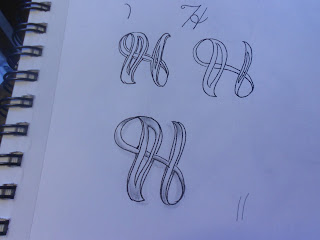 I wonder how many letters are conducive to this wonderful weaving technique...at any rate, loads of fun to play with.

I also made a piece for Joey's XIV challenge. Wasn't expecting to enjoy it as much as I did.

Can't you just imagine...having a barbecue in the back yard, going to feast and laugh, then over to the park for fireworks...can't you hear the screen door creak open and slam over and over again, as people come in and out with plates of food for the picnic table on the patio. Plenty of activity, lots of loved ones, good times!

And, last but not least, my piece for last week's Joey challenge. I created it, but didn't like it so I didn't enter it. But what the hey. Here it is. 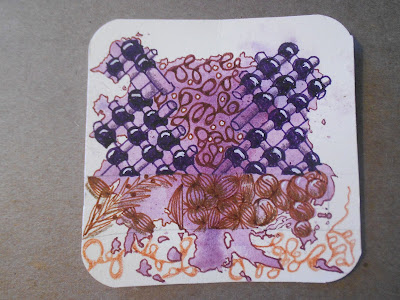 I dribbled berry juice on a tile, then made the piece using purple, burgundy, and burnt orange/tan micron pens. My favorite part is the upper area, full of Chemystery and Ipso. And, outlining the stain on the bottom makes it look like continents. Or islands.
Posted by HeidiSue at 2:05 PM 14 comments:

This week's Diva challenge, to use a little bit of black for added drama. I had already lined out a border on a page in my big spiral sketchbook, so I went with that. Did a string simply dividing it up into about six sections, and started tangling!

Finished it up last night, just as a head cold snagged me and pushed me right under...can't. breathe...achoo! 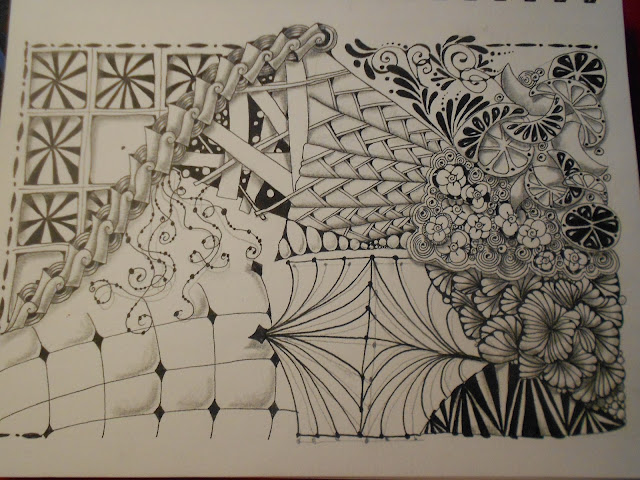 This was lots of fun to do...I haven't done a large piece in a long time and it was fun choosing patterns and filling things in. It seems a little unbalanced to me. Lots of busy-ness to the right, with larger spaces on the left. Oh well. But Laura is right: a little black adds a lot of drama. I like it...

Included are Bateek, Kollide, Hollibaugh, bead lines, Florz, Ragz/b'tweed, Onomoto, Cathedral, Molygon/Citrus, Pozer, Ginili, and Zedbra. There's a section of Flux tangleation, one of my favorites, all done in black. And around the border what I call Howl's Necklace (based on something seen in the Hiyao Miyasaki movie "Howl's Moving Castle" another favorite) 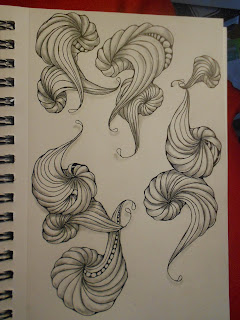 and this little invention. Not sure if it's really original, or if so, what to call it, but I'm pretty sure I haven't seen it anywhere. It reminds me of Abundies.

I've got a step out, but forgot to photograph it but I'll get it in my patterns section soon.

These two patterns were tough to get together, but I persevered. The irony is, I love both drupe and pokeroot, but getting something I liked out of combining them wasn't that easy.

This is what I ended up with...as always, shading made SO much difference! 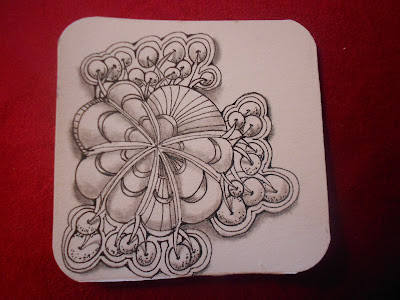 Huh, the pokeroot sort of looks like the roots of a giant flower....air roots.


Now, I also have been playing with Cathedral, a new pattern at tanglepatterns.com I don't like the rings I put in there, but the pattern is just delectable! I love the minimalist effect of lines and dots. Quite airy and elegant.

But when I got thinking about the inspiration for cathedral, I thought it would be fun to add an element of MA XIII and came up with this: 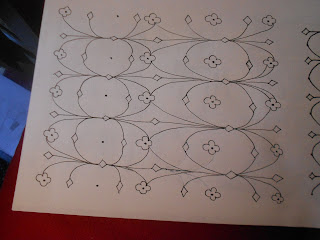 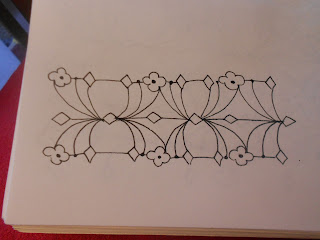 Then I honed it down to this...which seems like it might make an okay border...so I worked on it a bit more until I came up with a stepout


There's a column of diamonds connected by lines, then circles "flanking" every other diamond. They become the blossoms (from MA XIII) and a diamond on top and bottom of each blossom. Then draw the elegant curving lines from the diamonds out to the blossoms and "secondary" diamonds. A line along the "outer" edges, connecting secondary diamonds to blossoms finishes it. I want to put this around something as a border.

Probably the most fun I've had with a pattern in months.

Oh, I just now realized, this is Joey's 112th challenge, and it is Roman Numeral XII...hmmm, coincidence? I think not ;)

Well, anyway. Joey's challenge was to fill up the whole string with one tangle: Knightsbridge. Because there is so much filling in, it uses a lot of ink, so I don't play with Knightsbridge much, so this was a fun, challenging challenge.

However, I had just as much, if not more, fun with a new pattern on tanglepatterns.com...last week's new tangle was Cathedral ...it is so cool looking, so I played around with it and I made a page of it, as it is shown 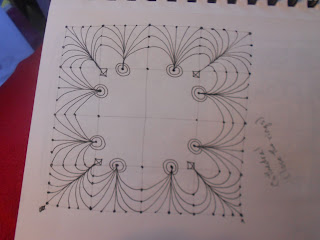 I finished a page, then added my own embellishments that I didn't like. (those rings? yikes!) But the pattern itself is very cool to look at, and I love the examples given on tanglepatterns.com.


But I got thinking...this pattern is based on the ceiling inside a cathedral, and another recent tangle featured on the website was MA XIII, which is based on a design on the entry of another cathedral. So I thought why not incorporate the flower motif from MA XIII? I like this SO much! I kept at it for half a day, off and on, coming back to play, over and over again. 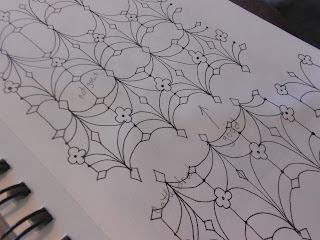 some ways were better than others. But I really liked the MAIII element, and the diamond shapes are pleasing too.

Though this isn't an original pattern, I plan on creating a step out to make cathedral as a border pattern and will post it soon.

Now, for my entry into the Joey challenge: 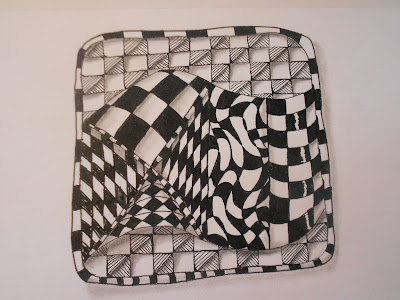 the pattern in the background is an adaptation that I love to use, called a-torm.

Of all the renditions of Knightsbridge, I like the one on the bottom center of the X the best. I made a standard grid, then did X's through each square, and colored in the resulting diamond shapes. One more thing: the left side of the X I tried filling in the squares with a scribble effect...not sure if i like it, but the sort of shaggy look was intentional.

Adele gave us a cool string this week, with some straight lines, and some curves. Four tangles to play with:

the String Thing Challenge can be found at Tickled to Tangle along with lots of things, like Wednesdays Words of Wisdom and so much creativity. Lots of patterns.

Swarm gave me fits. It seems to work in one direction, but not the other, if that makes any sense. That is, I can get it to work properly, going to the right, or clockwise...and that, only 2/3 the time (Believe me, I practiced this one dozens of times, trying to figure out what worked and what made it go wrong)...well, it looks neat when you have perpendicular sections, but not so neat when two sections "meet" at the ends. I never did get it. To this moment, if I want a cute little tidy package of swarm, I have to look at the stepouts. Doing it on my own, I flub it every time.

Now to the string: 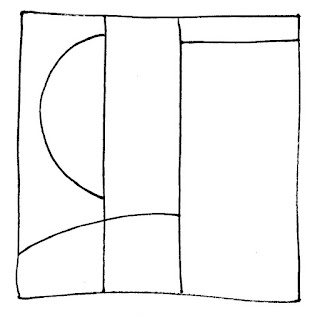 Isn't that cool? some straight, some curved. It will be a fun string with other patterns, too.

I created a tile: 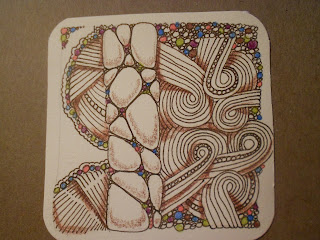 It is in brown Pitt 1.75 and the shading and coloring are prismacolor pencils.

when I finished this one, the idea came (stolen from last week's string thing challenge where someone did quib and echoism several ways that were stunning) to create some more.

Same string, but I turned them. I figured I'd break right out of the box and put tangles in different places, but when it came right down to it, Sand Swirl just SIMPLY would not go anywhere but the large rectangle, and N'zeppel liked the narrow rectangle, while swarm liked corners and curves.

In this one, N'zeppel did go somewhere different, and so did Swarm, but sand swirl seems to need that larger space. Tipple was fun in this one. 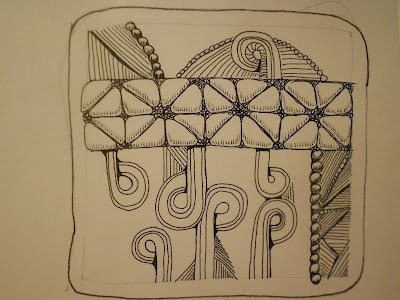 And here is the minimalist version. Sandswirl is pretty Mod looking, isn't it? I haven't ever drawn n'zeppel on a grid before. Though I prefer the random look, this one turned out okay.