We have a pretty cool challenge this week from Diva Laura Harms. Go back to the beginning, to the first pieces of tangle art we did...It's been fun looking at some of the pieces already submitted, but everyone looks so GOOD...I wasn't going to do it, because it doesn't feel like I've improved that much. (heh, maybe I was already so darn good at it from the very beginning, right? ha! Just kidding)

Well, I grabbed my first sketchbook, the one I was "on" when I started practicing zentangle. Honestly, my "style" hasn't changed much...though my lines are finer and I know a lot more about weighting lines and shading and such. So I couldn't find a tile that I wanted to duplicate but I did find a pattern.

My very first zentangle video was a tutorial on B'Tweed, by Maria (with some Rick in the background)...and I gave it a try. 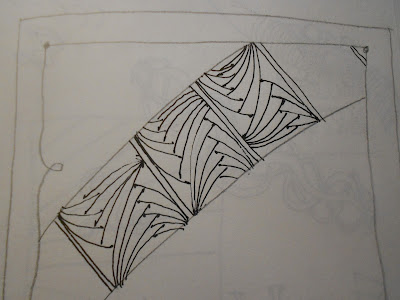 Hahahahahaaa! wow. But look, I made a border for my "tile" (which back in those days was just squares drawn in my sketchbook...no actual tiles or anything)

And here is B'tweed, with shading, done soon after, or maybe the same day:

I clearly was confused and uncertain. I didn't know why lines were supposed to go where they were going, and so I didn't have a clear idea of what I was aiming for.

Believe me, this was my best attempt back about two years ago.

which seems about right, to make a new, improved version of that 2014 Btweed

Which is what I did: 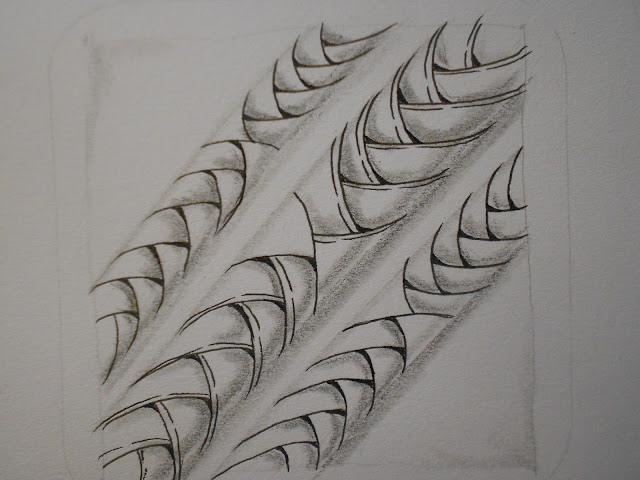 So, maybe I have improved some... though I do prefer Btweed in a pointed pattern...triangles and radiating webs and such.Still, going back and seeing what I attempted, my first try. Pretty encouraging. Like before and after pics when you are getting fit. 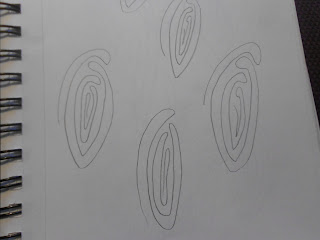 This week being Valentine's week, the Diva challenges us to create art that is Valentine centered: hearts, red or pink, lacy, etc. 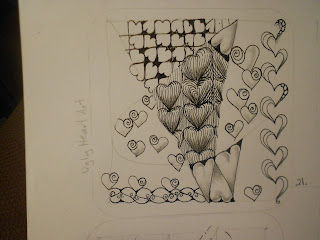 but they weren't enough...so I put in some hearts of my own, and added those spirals. I actually call this one Ugly Heart Art...It just didn't speak to me...but...

I liked the spiral hearts so much, I made a piece based on it... 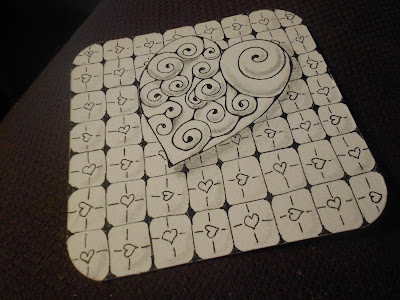 Spiral Heart. with a background of Caught...first spotted on Tickled to Tangle, in last week's Wednesday Wisdom Words. and...
...Shading.
Oh, how I love shading!

And, with the monotangle in mind, and having peeked around on Adele's site, I remembered her LG pattern. A new tile, filled up with LG


The little black dotty hearts to finish. Oh my GOODNESS, the shading!


And so i thought I was finished, until today. I got up to string 32

and when it came right to it, HeartBox called out my name.

I filled up the centers (that four corner area) with HeartBox...except I put the fourth one in a different corner. Put my trademark spirals (hee hee trademark hahaha) in the hearts. Then lines of hearts going up along the legs/arms of the 4

It just turned out I put four hearts on each "limb" and that's when I named it. Four of Hearts. Then AND ONLY THEN, did I realize the string itself is a numeral four! ha! And if you're counting, I did put five on that bottom leg of the 4. what was I thinking!

So, Four of Hearts. And yes, the shading makes is SUPER cool.  Turned out to be a fun challenge, after all.

and with that, I have a few more string tiles

Looking over my sketchbook, I've come to a conclusion. I like the pieces that use fewer patterns. A good monotangle, wow! And the simplicity of only two or three patterns makes a big difference.

However, if there is a piece that i like, with a lot of patterns, what appeals is a unity within. There should be a shape in common, or some kind of line that goes through the whole piece. 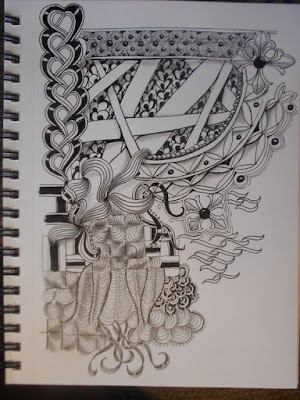 this one has lots of patterns. Many more than I usually like. But I like this piece, and when I sat and tried to figure out why, it came to me: unity comes through in the black satiny ribbon that appears in the HeartRope, the Up&Across,  and in Bunzo, and it is there in the ribbons on the very bottom. There is a unity of form in the black perlz, and the heart shape is repeated in HeartRope and Join.

Hypnotic repeats the bunzo curves, and undling takes the repetition to a whole new level. You also see the repeated lines in Meringue.

Hollibaugh, crosscro, and the rivulet pattern (I invented that, but haven't named it yet) provide variety and balance.

Overall, a pleasing piece that could have been overly busy, but unity and balance bring it around.

I used Frond and quib with my molygon. (this is my second favorite)﻿

The Diva Challenge this week was to use the new official tangle: Molygon! Oh what fun! and because I have a project of sorts going, where I'm using the strings from Tanglepatterns.com, one at a time just in my sketchbook...well, I just used strings 13, 14, 15, and 16 for this challenge.


﻿﻿
I sure have been enjoying my personal project. It's got my creativity flowing. This one, "worms of doom" is string 14. There is lots of Lava Juice here, and that kind of wheel thing (Maybe that's similar to the old fave "Pepper"?) and I just made up that fringy looking stuff with an aura around it. I actually like this one the best, and second is "In the Flow" (see above)

Here we have Palm Party, string 15.
I had to add color, to bring out the palm tree effect.
The trunk is A-fog and would have
worked better lengthwise. Oh, well.


﻿ And here we have string 16, which ended up looking palm frondy too, especially with the two Purk type things. Also, Flux and a banner across the bottom.  When I added some teardrops to the molygons, they look more like orange slices now, or maybe some other fruit with seeds. But the Purk still look like two nuts hanging there. :)


Okay, so this was lots of fun. Now, back to my string project!
Posted by HeidiSue at 8:51 AM 4 comments:

Well, it took me long enough, but I finally looked at Joey's blog today, and found a Cayke challenge.

Right now, I'm going through the strings in order. I'll do as many as I want, one at a time, and so far I have 20 done. 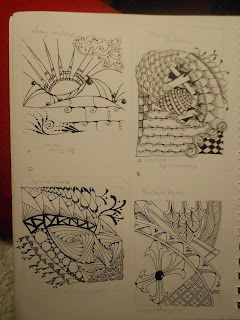 This is one of my favorites in this series: 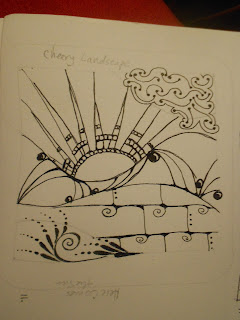 C-bun gets a little steam punky with those rivet looking dots, and see there is Pinbawl, and my own Concert...with a cloud of (what is that pattern called?)


Well, anyway. I've been doing a few of these a day. They go quick because each one is only tile sized, and the strings define my parameters for me. I'm on quite a roll.

So, I was in the middle of my fifth page when I caught up with Joey's Challenge.

And I covered it with Cayke! along with scallops or some such pattern.

then colored it, some. Oh, there is some Ripple in the center.


I was really trying for the depth that the string has in it, and I think it would have worked better if I hadn't had a section colored the same as the center part. But...if you hold it at arms' length, it does have some depth. I enjoyed this a lot. Fun!