...I think deci is ten in Latin, right? as in decimal?

anyway, that was a fun string, and what a combination of patterns... Wedge, Diva Dance, Snookum, Showgirl, and Ticking.

So, I did create a square inside my tile, and put snookum on that. Then wedge is in the center. But where to put Showgirl? So that went in the corners, quite funky IMO...I filled up half the string with diva dance foxtrot. Ticking around the opposite corner, bigified.

When it came time for shading, showgirl just simply didn't show up...so I colored the ticking purple, and did some purple shading on showgirl...so she shows up! ha! Showgirl doesn't really work that well in a corner. oh well.

The Diva's challenge was...Stripes. I decided to fill a full page of my big sketchbook. Stringing it, the stripes took on a Hollibaugh look, and filling them all up was loads of fun. 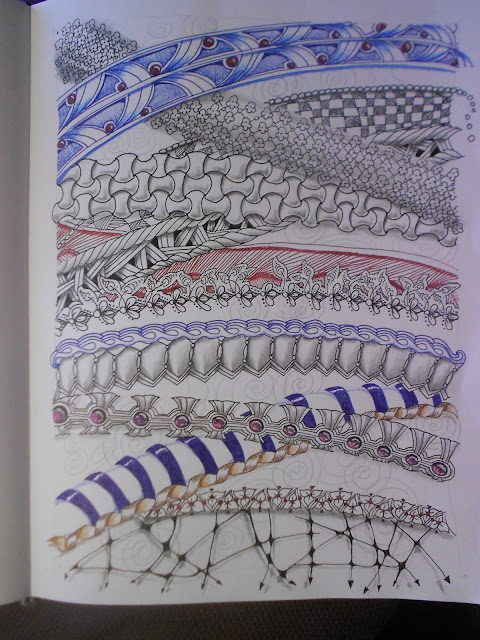 I used Pinbawl, MA XIII, Atorm, Huggins, Baton, Meer, Diamond Drop with Zinger (that's the stripe that looks like little bugs flying all in a line hahahaha), Shnek, Cle, Striping, Coil, Trimond, and N'zeppel. There is a band of jewel looking running across the striping. I don't know what it's called, but I found it clicking around on pinterest.

It is by Molossus, whose name some might recognize. Anyway, I found it when I was exploring steampunk a bit. And, some gems in the circles. Mmmmm.

Then, in the background I did some simple spirals in gray prismacolor pencil. Fun stuff, Maynard!

And, some playing I did in my old sketchbook...I just tucked it away today when i straightened up my "art nest".... 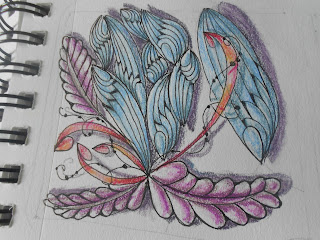 this week at Joey's blog, we're challenged to work with a string IX, after the Roman numeral. This has turned out to be a fun ongoing challenge, and this week was no exception.

With an interesting combination of tangles to work with...seven of them, because the string has seven sections...and I wanted to use them all, but it just didn't work out that way. 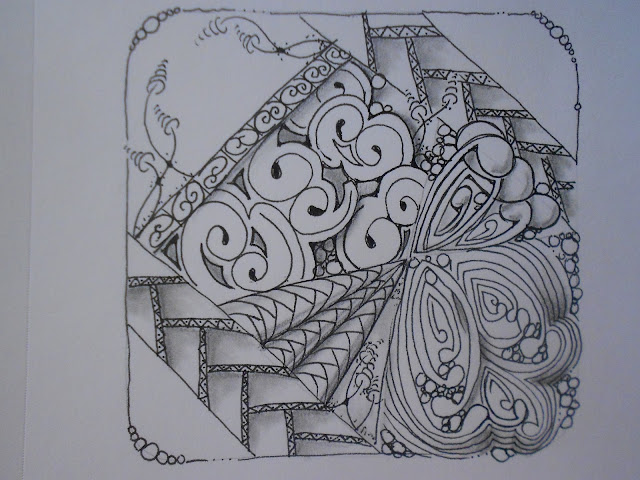 B'tweed and Ragz are so similar, but it seems Ragz is made of straight lines, while b'tweed runs more curvy. One of the patterns I've never played with before is Mei...it was fun to break it out of a grid and do individual motifs, but I also put it on a ribbony section. Zinger here and there, Mooka two ways, some tipple, some shading...

and I just couldn't make gingham or demi work in this one. But demi is a cool looking tangle. I'll definitely have to play with it some more.

And, yes...I did do another piece with the String Theory challenge the diva threw our way 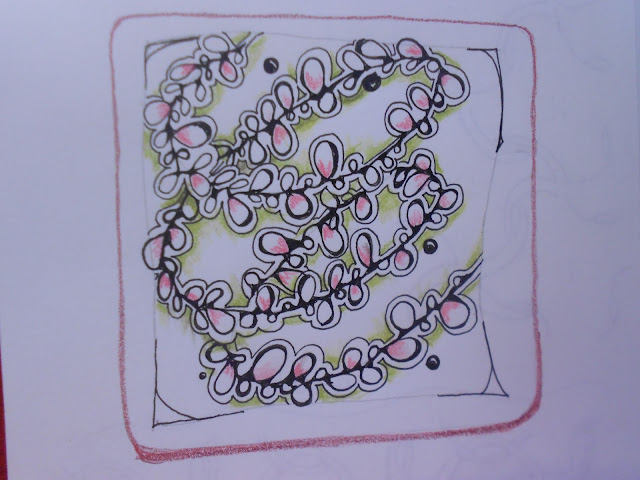 Ipso SIMPLY must be drawn, and I put it along the entire string...and because it's a spring string, I did some shading in green and pink. It's such a fun string, I bet I'll do more! ha!
Posted by HeidiSue at 2:35 PM 11 comments:

This has been a heck of a week. Plenty of stress in my personal life...but that has eased up a lot, thank goodness. Amid the stress, and because of it, I've kept busy with zentangle, including creating a piece "on purpose" for a friend. That is to say, different from the relaxed, unplanned zentangle method, I had an image of what I wanted before I started, plotted it out on paper, and followed through, with several false starts.


My friend Tina is a California girl, living in Utah, and she really misses the beach. At her work station, she has sea shells and ocean art. So I knew I wanted something that looked like the beach.

Likely patterns were crest, zailz, sand swirl, and sand. Also, Sanibelle is so seashelly I knew that had to be in the piece.
Then the lightbulb event: Putting frickle where the crest "ocean" met the sand swirl "beach"...That REALLY looked like "tender, curling foam"...like waves washing ashore. And, since frickle is one of Tina's favorites, it simply has to be in there.

This was a first try at the whole piece, but at the end, it was way too busy. Sand simply didn't work in the piece, so I decided not to use it.

so, with these ideas and changes in mind, I did another piece


It has all the shapes I was aiming for, but coloring it in ruined it. ... and I knew the color would have to be more subtle. 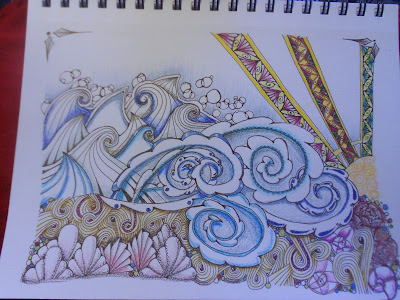 And this is the final version. It goes to Tina today, and I'm excited.
I put a "Concert" sun in the corner, with ando patterning the rays. And the color relegated to shading.

Now, on to the Diva Challenge. It's string theory, and it is spring!

I wanted to use springlike patterns, and it just so happens, this week's new tangle at tanglepatterns.com is a flowery one called MA XII. It takes on a sort of basket look in that section of the string, so I put zinger and fescu in there.
Another pattern new to me is Joust, that fan looking section there. I had just found that pattern on pinterest, and practiced it in my sketchbook. Joust fits with MA XII simply for the fact of MA XIII being based on a 13th Century gothic French cathedral...and jousting was a medieval pastime, right? Those joust sections morphed nicely into b'tweed, and ipso called out to me, wanting to be included.
Pepper and onomato in the center. Then some flux sweeping along the bottom, and lines of I can't remember what it's called, along the edges and in the corners.

Since I managed to get this done early in the week, I'll prolly play with this challenge again, maybe along with Joey's challenge. 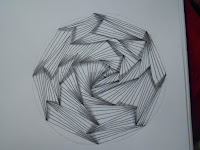 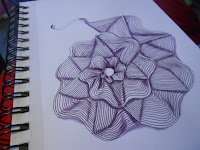 and just to finish, some little tricky treats. Paradox on an octagon, and maryhill on a curvy spiral. COOL HUH!

The challenge was to use N'zeppel, Marnie, Crescent Moon, and Fandango. I had forgotten how much fun fandango is...but I had a good time with it in this challenge. N'zeppel is always a great pattern, and Marnie was completely new to me. I'm going to play around with it some.

anyway, this is what I came up with for Joey's challenge 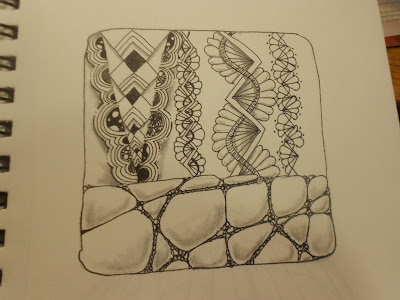 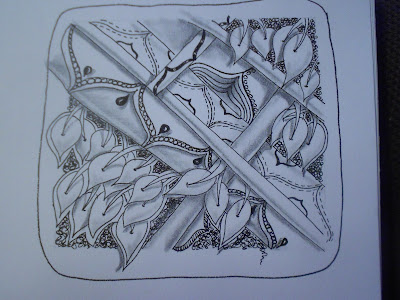 the patterns were poke leaf, hollibaugh, and copada...

this is a classic "look what shading does for a piece!" piece. Fun to do and it did turn out.

And last, but not least, I thought I'd throw in a fun little jumble. It started out just me playing with punzel, and then it looked like fire, and then I colored it. the picture is a bit blurry, though I took two pics trying to fix it. Oh well...it was fun coloring it. Isn't it cool, doing zentangle, you can create your own coloring book! ha! 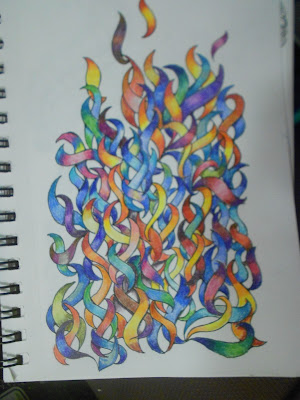 It has been a long week. Let's just say I'm really glad to have zentangle to keep myself on an even keel.

This week's Diva Challenge is a UMT, Fassitt by Lynn Mead. Haven't played with it too much, but boy did I have fun with it this time!

I decided to do a classic sampler style piece, with lots of tangles, and had SO much fun. 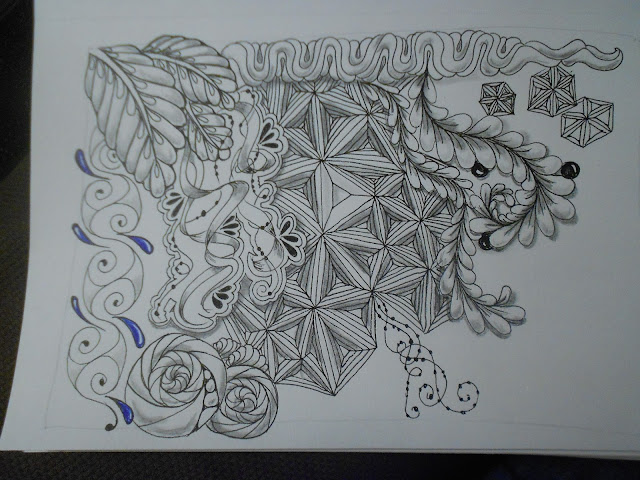 I had a lot of fun doing this. The patterns are, from the left:

Fronds, andante, ribbons, bead line, embellishments, niuroda, prestwud across the top, fassitt, flux, and some little fassitt motifs. Beadlines down at the bottom spilling out, and a few black perls amongst the flux leaves. Along the top of the niuroda is a line of hamail going along the curve rather than in a circle. I think it looks cool.

There are a couple of pieces I've done this past week or so, not attached to any challenge, just relaxing and fun to do. 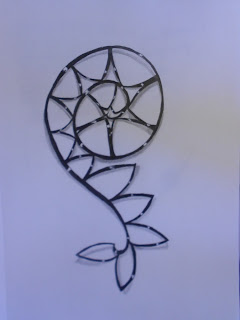 Just a spiral with tropicana elements 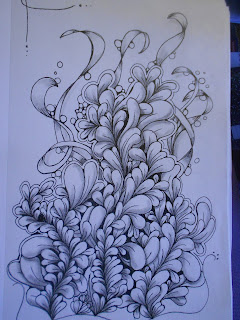 Flux and ribbons and bubbles

Now, on to Joey's challenge for the week. We're up to VII for our string, with instructions to use zailz, queen's crown, nippa, and gotcha. With a bonus for using all four.

Well, I couldn't pull that off, but I did manage to something: 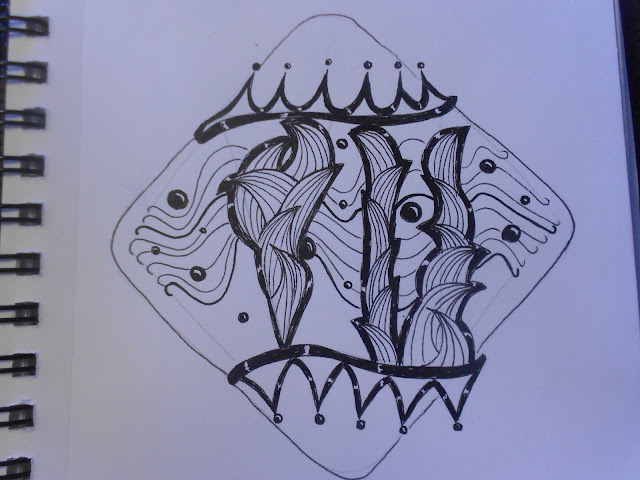 Oh...just realized, I never did any shading on this one hahaha...it was fun doing the auras all shiny, and the perfs are good that way too.

The DivaChallenge this week is from a guest CZT  Jane Reiter. It's a unique challenge, in that we are instructed to stack tiles on top of each other, starting with a bijou in the center, and then increasing in concentric tiles. Decorate each tile, filling the edges with patterns.

At first I wasn't going to do it, because it seemed like a lot of cutting and measuring. So I put it out of my head for a while, and got to looking Adele Bruno's String thing challenge: Create a tile using her yummy pattern Citrus.

So I played with Citrus a bit, and was deciding what my tile might look like. Then, today at work, the inspiration came: Use citrus throughout the stacked tiles of the Diva Challenge! And I stole an idea for drawing the stacked tiles, thus eliminating the need to cut (though I did measure for accuracy)

Starting with a bijou, I then traced a regular tile, which is 1.5" larger, not one inch...and then a five inch square, and a 6.5 inch square as the largest. The Bijou tile is real, and glued down with a (tacky, dried up, neglected) glue stick. Otherwise, all the stacks are drawn on.


The sketchbook is my new Mix Media Canson 7x10, with the 98 lb paper that I just LOVE. And you can see the bijou there. I made that out of tiepolo paper that I bought online. SUCH scrumptious paper. I have another whole roll of it still in its packaging up in my closet.

And making these Citrus pieces to seem sort of hollow and flat...maybe I have steampunk on the brain, but I really think this pattern could do great in a steampunk themed piece. Like, do they look geary? Or something?
Posted by HeidiSue at 6:51 PM 17 comments: