Heh, whenever I read or say the name of this pattern, Jethro Tull comes into my mind hahaha Hey Aqualung! ha!

Well enough of that.

A lot has happened since my last post. I got really sick with cellulitis about three weeks ago, and am still feeling the effects. It weakens me, so that when I do the slightest thing, my heart thuds and I get out of breath. There's that.  But on the 12th, even though I didn't feel up to it, I went to a job interview...and got offered the job two hours later. :) I'm excited about that! And sad to leave my current job, where I've been for five years. But the new job is a seven dollar per hour increase in pay. Noice, eh?

And, about one week ago someone stole my wallet. *sigh* I do NOT like that...there was a chunk of cash in it, part of Wylie's share of the rent. Honestly. And yes, still exhausted from the cellulitis. Rough. Lots of stupid paperwork type things to deal with, no lie...and me worn down already. I only have so many spoons a day, and bank errands take a LOT of spoons.

Still playing with that amazing baby! 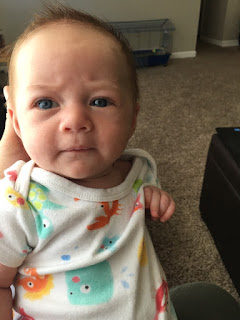 he started smiling this past week, and it is SO MUCH FUN! 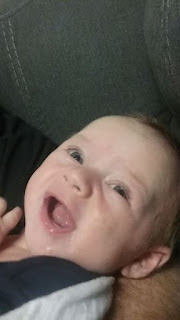 
The Diva Challenge this week was to use Aquafleur in a tile. I had already put the string for IAST #200 on paper, 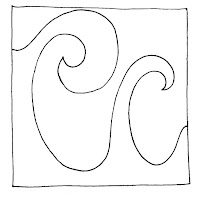 and used C-perfs, the pattern that Adele created for this big anniversary. So I started with that string, and got this: 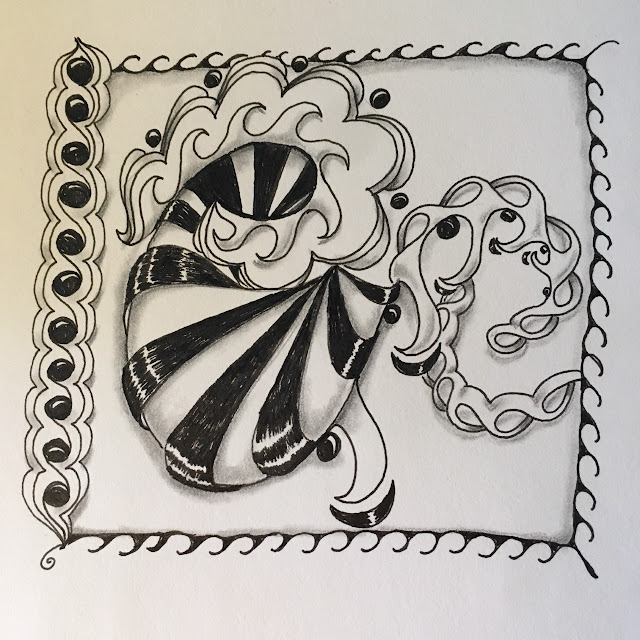 I like the way Aquafleur goes "under" for part of it, and I really want to play with C-perfs...lots of scope for creativity!


a few other little things... 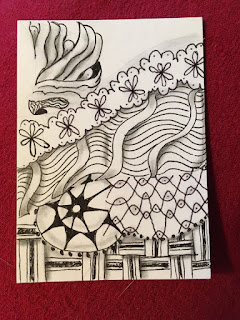 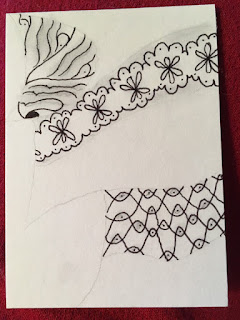 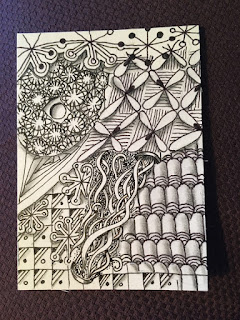 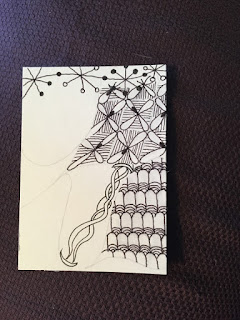 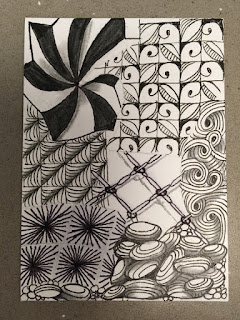 Stephanie Drewa, from The Traveling Tangles Project on FB gifted me this amazing set of started ATC's...she put a few patterns on each one, going through the abc's. And I finished, using patterns on the opposite end of the alphabet! Still working on it.

and last but not least, an old piece I found when I decluttered a bit around the art supply area 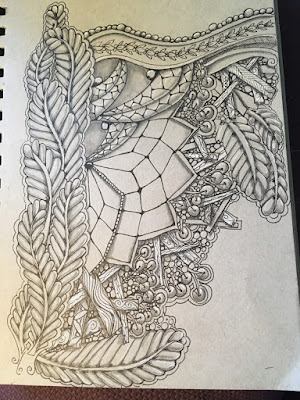 Funny how much you like something so much when you put it aside for a time then look at it again...
Maybe I'll put this one up in my new desk, at my new job...

Wow, it's been a couple of months, hasn't it...Not that I haven't been doing plenty of tangling, just been out away from my computer for much of it BECAUSE!!!!!

Believe me when I tell you, I am head over heels in love with this one. When I came home after he was born...after 30 hours of helping my daughter labor, it was beyond time for a shower...I got refreshed and put on clean clothes, and all I wanted was to go back and hold Orion some more. Much of my free time has been spent at home with him and his mom, and a few times just baby and YaYa home babysitting which I love better than anything.

And he is an easy baby. Easy to calm down with a lullaby or something to suck on, and even when he is full bore hollering out the top of his lungs, it isn't grating or nerve wracking. Just a little love bum.

Well that's what I've been doing for the past month. Orion just
made it to the one month mark, and today (Tuesday) he is
five weeks old. Amazing, isn't he?
Now, for the Diva Challenge.

I've been checking in with the Diva, but generally speaking haven't done anything with the challenges. I found some terrific beads on a trip to the Gem Faire with Orion and his mom last week. Want to make something cool with them, something to possibly hang up in my window where I can look at them. I thought of R2 while I was selecting them :) and then ended up not doing a tile for the challenge.

But I did this one, for the challenge this week. 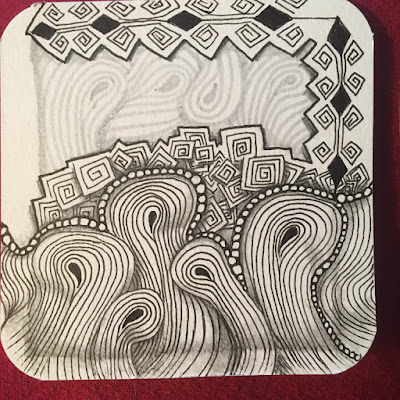 The tangle we're using is Dansk, by Margaret Bremner. When I got over to her blog to see the stepouts, I was impressed with her MANY tangle patterns and spent some time practicing a few of them. Dansk along the bottom, and Box Spirals nestling in along the top. My own Torsdag on the border, and some background Dansk in grey Tombow. My gosh, does shading EVER make Dansk shine. I LOVE it! And so I ran with shading this into multi-level fun.

Another challenge I look at every week is Adele Bruno's It's a String Thing, and one that caught my eye, and my heart, was when she posted a challenge in support of Lily Moon, when her daughter's cancer came back...SO so sad.

I made this tile for that challenge, but because it doesn't require a blog, no blog entry. 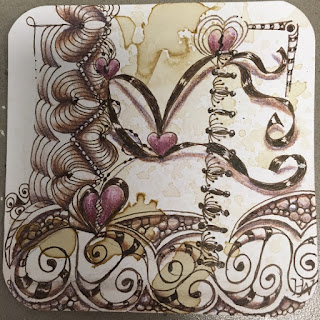 the challenge used an M shaped string with four of Lily's own tangles. It was a sad time, and my thoughts and prayers were with Lily in this tragic season of her life. I think in the end, it isn't a pretty tile, but has some beauty in it, and some interesting things. It is stained and there are broken hearts in it...all of it, a little bit like life, maybe?

Along with the IAST challenge, I have been involved on Swap Bot, especially seeking out swaps using ATC's. Zentangle seems to be made for ATC's, but I am also interested to see other styles of art on these little scraps, so I've done some swapping. There are also post card swaps...and guess who makes her own post cards! ha! I've also done tangled envelopes, poetry swaps, book list swaps, etc. Some days when I check my mail, there's four or five Happy Mails in there! And I've started a lovely collection of ATCs.

here are some of the pieces I've sent out:

This one...I want to get busy making more super rich vibrant colored paper, because LOOK AT IT! WOW!


I have received SO much happy mail, including letters, recipes, poems, ATC's, note cards, washi tape (who even knew there was such a thing hahahahaha) and some of them works of art from the envelope to the ephemera slipped inside. Good stuff. But since getting samples of art outside the realm of zentangle was my first reason to start swapping on swap bot, I present some ATC's I've received:

But this is my favorite so far, among all the swapping on swap bot...a "New to Zentangle" swap where we were to make a sampler 4x4 in a 1" grid, and put a tangle in each grid. Well look what I received: 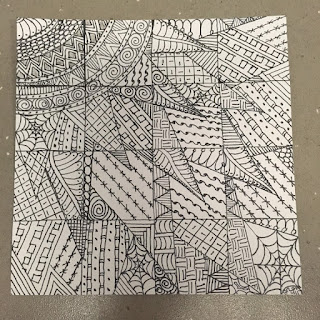 Isn't this JUST SO COOL! there's loads of patterns on here, but the artist crossed the grid lines, to create a spectacular sunshine with triangular rays beaming out. I was impressed...and then I colored it. Ha! 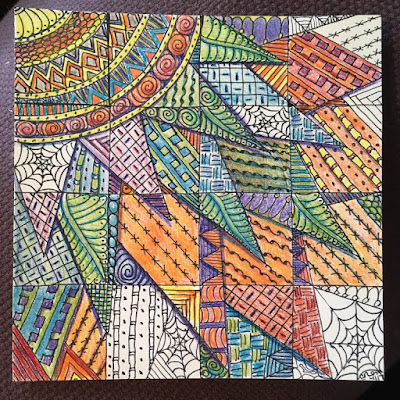 and there we have it. My first blog entry, and my first Diva Challenge entry, in over a month. 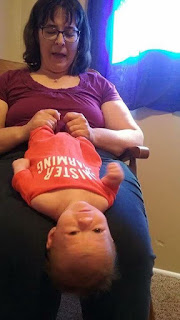 It's been fun hanging out, though. 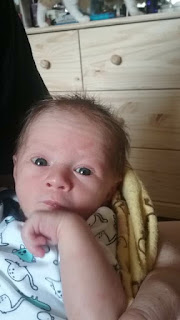