This is a fun challenge, because I LOVE Hollibaugh. I have lots of monotangles out there, as well as many stringed tiles which feature Hollibaugh. Lots of my favorite pieces have this tangle in them. Wreaths, balls of yarn (or rubber bands, or tape), trellises, ponds with beaver dams...I've tried it many ways, and thinking about this, I was tempted to run with something I've already done...until I started clicking into some entries.

And I found what I wanted to do, at the Yorkshire Tortoise.

I admit freely that I stole the idea was inspired by the idea of making a hollibaugh tree. 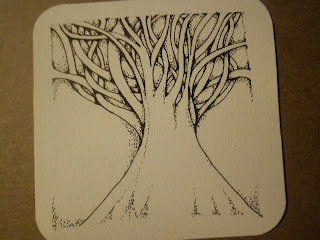 Stippling and weighted lines for shading.


But then I decided to add shading to the branches, not just in the negative spaces. 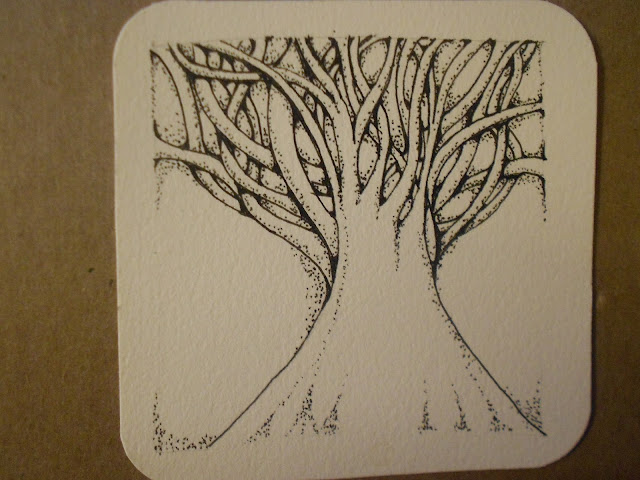 This is the finished product. It was fun to do, and I like the result. First time I ever did a hollibaugh tree. Yes, shading the branches makes a difference.
Posted by HeidiSue at 3:07 PM 11 comments:

Joey has an X challenge this week...Xplode. It is a fun pattern. 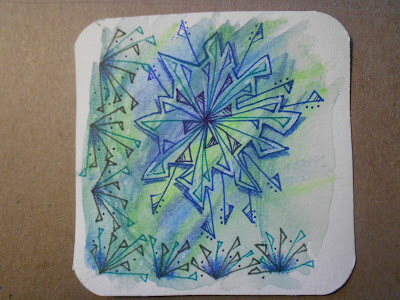 I started along the edge, several clumps of Xplode, and then a starburst in the middle. Shading, etc. This was on one of my colored tiles that i created with Derwent watercolor pencils, and I used green and blue microns in 05 and shaded with prismacolor pencil.  Cool how it looks like it's sort of floating there.
Posted by HeidiSue at 5:23 PM 4 comments:

This week we are challenged by Laura Harms to create something using Tripoli. Oh! I had a hard time with this one. I love the pattern, truly, but for some reason I couldn't get my Tripoli mojo on.

There are several other projects I worked on, that also fell flat. Remember my minimalist crescent and stars from last week? Well, I tried a bunch of ways to do that one the opposite way, with tangles all around the moon and stars, leaving them white...and here are my efforts: 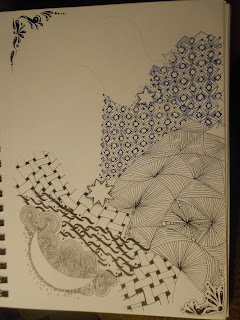 First attempt. I wanted to surround the shapes with dense swirly tangles.
Not too impressed. 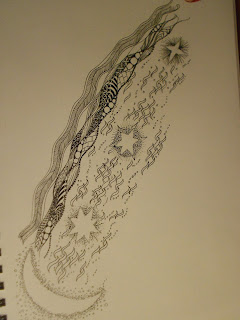 Then this one, where I tried for lots of swirly stuff, more flow. The sort of flowy ripply stuff in the center was the best part of this one, but then I had to go put the lumpy curvy stuff on the edge. 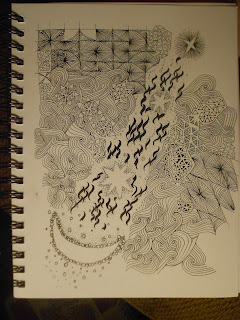 so this one has the same ripples in the center, and I colored them in to make them more substantial, THEN packed the space around it all with denser, grid oriented tangles. You can see some Tripoli in there but ultimately I don't think this works, either. Maybe I'll figure something out...a little bit of research on negative space art.


Anyway, I also put in some practice on Tripoli, trying to put it in a piece that I liked. Ultimately, I traced a tile in my sketchbook and put a string in it...

it came out okay. Shading it made a huge difference. 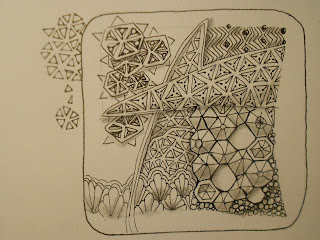 I followed through on the hexagon shape with Barney in the bottom right, and then a take on Static in the upper right. Some Sanibelle on the bottom to relieve all the lines and angles. At the very end I carried the Sanibelle to the edge, and the lines of the auras.

It sort of reminds me of I dunno...Stonehenge. Or ruins of an alien metropolis?

and then, because I REALLY wanted some curvy stuff so... 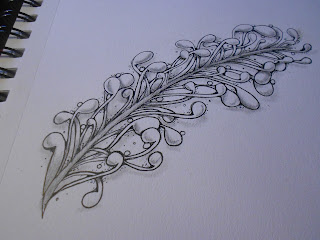 Got the idea for this from Helen Williams and just ran with it this afternoon.

Right now in the morning sky, there are many planets visible. Jupiter has been hanging out over the eastern horizon before sunrise for many weeks, and in October there was a conjunction with Mars and Venus practically touching.

Every day when I go out to my car to go to work I look up and there they are. Various and sundry lights in the pre dawn sky. (though I did miss the conjunction, thanks to overcast) One of the things I like about going to work early is the opportunity to see this display. Living in the city, I sorely miss the glorious array that I was blessed with every night when I lived in the country, but the planets and moon are so wonderful early before the sun arrives, even in a city.

So, the other morning, going out, I saw a stunning sight, truly. The waning crescent moon was just over the eastern horizon, like a cup resting on the mountaintop. And lined up, launching straight up into the center of the sky from the cup of the moon, were three brilliant planets in a perfect line. It was absolutely breathtaking. 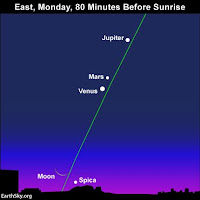 This image is from Earth and Sky News which is one of my favorite subscriptions. The graphic isn't as glorious as the real thing, but it does represent just what I saw the other day, except my sky was utterly dark. It really was something.


Well, I drew it on a page of my sketchbook. Crescent, and three orbs ascending, from larger to smaller. I thought I would tangle all around the shapes, leaving them white and filling the page with patterns. Even Van Gogh's Starry Night came to mind...lots of swirls and strokes, right?

But then I saw the Diva Challenge this week: Just a little tangling, and a lot of white space. And I knew what to do with my page of moon and stars. 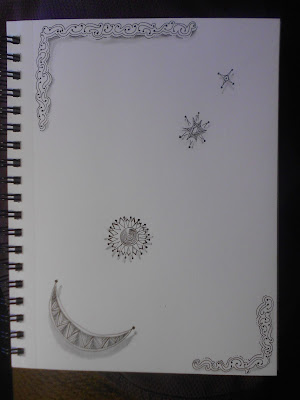 The planets are differing brilliances, which I represented with rays coming out from the orbs. More rays on the first one, less on the second, and only a few on the last one. In the center of the first is printemp, surrounded by King's Crown. The second star is a six point Auraknot with rays, and the smallest one is a simple four point widget (if you will). I put HiBred all through the crescent moon.

At this point I stopped and put it aside for a few hours. It still needed something, and that turned out to be the curly stuff in the corners. It reminds me of Neil Burley's Noodlz (which he included in his book, but it isn't on his page...) However, here is Neil Burley's blog. He has a page of his tangle patterns, but the blog is packed with all kinds of creative endeavors. What energy...and such creativity!

Well, after I put the corners in, I added shading which absolutely finished it. The plan is to draw that moon and stars again, and pack the page with tangles, leaving the shapes white. Won't that be cool!
Posted by HeidiSue at 10:01 AM 15 comments:

when I clicked over to Joey's place I was thinking "It's V week. I hope the pattern is verdigoh" and I wasn't disappointed!

Verdigoh is one of my favorite patterns. I did a series last year featuring verdigoh as a border for many different looking pieces.

Anyway, it turns out, I'm reading a library book and needed a bookmark. My practice is to create a zentangle bookmark and use it while I read the book, then return it, with the bookmark still in it. I always hope that someone else will be blessed by finding these little artworks when the book is borrowed again.

So I made a verdigoh bookmark, and here it is. 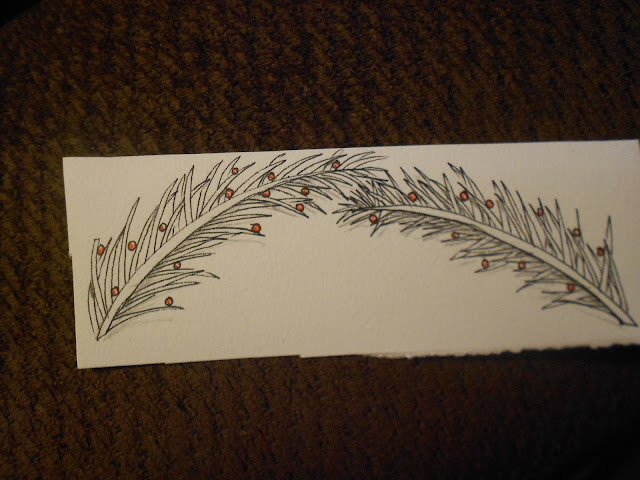 I like how simple it turned out. And I am now in the mood for more verdigoh, some pine trees and rivers and foresty looking tangles.

While I'm at it, I want to post some pieces I've made for former Monotangle challenges from Joey: 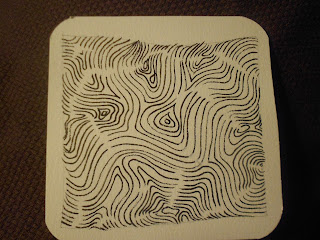 This one is Undu, from last week. I created it, then left it at work so it didn't get entered until now.

And I also did this one ages ago for the Linq challenge and then forgot about it. durr... 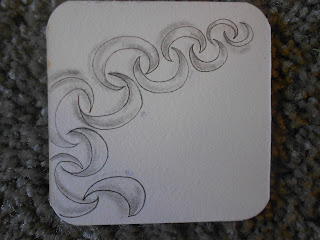 I have yet to do Maryhill or Queeries, but I will. And I tried Pea Nuckle. I really did. I may figure it out and enter it, but it's a toughie.

This is my blog post about this week's Diva Challenge, but I wanted to show a couple of tiles I did, inspired by things on the internet, new tangles, other challenges:


This last one I didn't do...that is Wylie's lovey fat cat Velcro and isn't he just a sweet puss.


Looks like there's a new autumnal tangle out, from Zentangle (tm) called Gourdgeous. It's a rustic, organic tangle, and does look like the harvest is in.

The Diva has challenged us to create using that very tangle.

Here is my piece. I chose tangles that echoed the Autumn theme: harvest and blowing leaves and random detritus here and there...found a quote I liked.


The grid panel there across the top is called pillow, and I put spirals of trumpitz here and there, some individual Flux leaves, abundies, oke, beadlines, cruffles.

For the sections of gourdgeous that are filled in, I used a size 05 pen that is almost out of ink, which gives an even more rustic effect I think. I like that in this piece.